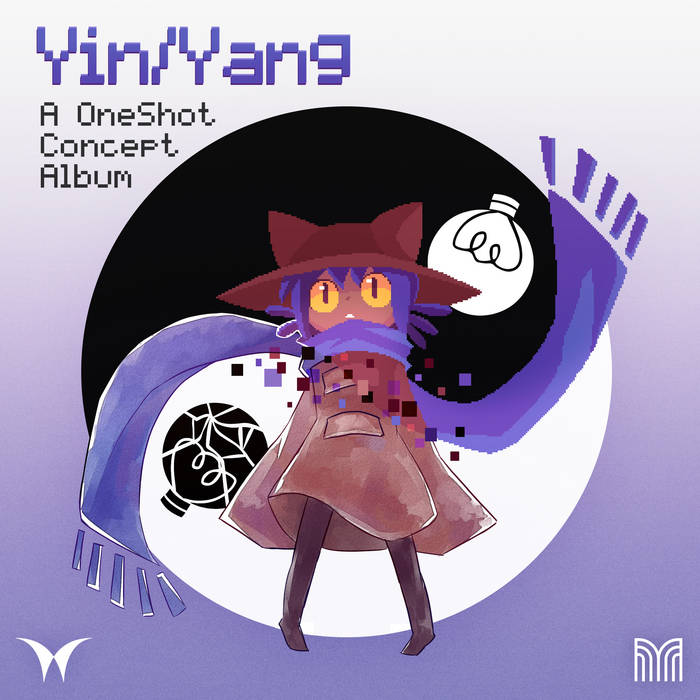 Kamani YIN / YANG is a well-made concept album. It's fun to listen to and it's about OneShot, which is great for me. I would recommend playing the game first, since otherwise the songs might not make much sense, but it's a real good listen.
Thank you for putting out such a neat concept album. Favorite track: A Distant Prayer (Ending).

Xubiod i don't care about spoilers i just get good music when i find it ok lemme be Favorite track: A Shadow in the Light (Yang Ending).

MischievousLittleImp This album is so emotional, all of it's musics are amazing and strike right in my heart.
(The Ramsong was a nice surprise, by the way.) Favorite track: Niko's Lullaby (Home).

Kyraya Dameki Maybe it's just me, but the tracks in order genuinely felt like a musical to me when I was listening to them.

The arrangements themselves are stellar -- each of them manages to capture the mood of OneShot in its epilogue. Both paths through the album manage to convey a shift in emotion through the tracks.

Each of the tracks is great, and they are even better together.

My least favourite track is "Happy Niko" if only because it doesn't really seem to fit, but it's still a blast to listen to! Favorite track: Alpha and Omega (My Burden is Light).

I played the original version of OneShot in the summer of 2015, and immediately fell in love with the game. It was refreshingly self-aware, but not in the comedic sense common in games and other media: it actually explored the complex and emotional relationship between the player, the game, the game world, and the player character. I felt immersed and engaged in the story in a way I have never felt about any other game--I felt like I almost knew the game already, as if I had created it myself and then forgotten it. About halfway through my playthrough, I correctly predicted the choice I would be forced to make at the end, and so I had to play the second half of the game with the awareness that I was about to lose either Niko or the rest of the world. When I got to the end, after much deliberation, I did choose to save the world, but it was difficult for me to accept that there wasn’t an ending which resolved everything. I intentionally did not play the other ending of the game, even though I had figured out how to override its lockout: I remained true to the “one shot” nature of the game.

That same week I got in contact with Eliza and Casey, since I felt like I needed to know these people who had made a game which reflected my ideas and feelings so well. In part to celebrate the game, and in part to get Casey-senpai to notice me, I created the arrangement of “My Burden is Light” which appears on this album as track 4, “Alpha and Omega”. Casey did notice and said some very kind things about the music, and I remained in occasional contact with both developers.

Several months later, I decided to give someone I cared about a copy of Oneshot, and in preparation for this I decided to break my promise to the game and play the other ending. When I saw what happens if Niko returns home, I fell in love with the game all over again. While I maintain my decision to save the world, not knowing what would happen on either ending, the “return home” ending was much more deeply satisfying to me when comparing the two endings a posteriori, for certain reasons I can’t elaborate on without spoiling it.

Yet the two endings were still balanced, and I began to consider the delicate way they complimented each other. The “save the world” ending gave the player some extra content by Casey, and the “return home” ending focused on a special feature made by Eliza. Each had its own ending theme, appropriate to the context, and the credits in one case were literally the inversion of the other, light on a dark background versus dark on a light background. So once I began working on the album, the theme of “YIN/YANG” was a natural choice. On the “yang ending”, Niko fills the world with light but can never return to their home; on the “yin ending”, Niko’s eyes glow brightly in the dark.

I’m a big fan of the use of a ballad with lyrics to end off an emotional RPG. So I set off to compose the ending song OneShot did not have. The vocals would of course have to be from Niko’s perspective, and it made the most sense for Niko to be singing to the player just before making the decision at the end of the game. Once I had set up the song like this, I realized that what would happen at the end of this song would depend on the choice the player made; so I decided to compose an ending for each path, and then finish up with an arrangement of each respective ending theme.

I began “A Distant Prayer” with the “Distant” theme and ended it with “My Burden is Light”, but the remainder of the music is original, as are all the lyrics not lifted directly from the game. Similarly, “A Shadow in the Light” and “A Glimmer in the Darkness”, the soundtracks for the “Yang ending” and “Yin ending” respectively, are original music with voiceovers adapted from the game’s script.

“Turning Once Again” is an arrangement of “Self-Contained Universe”, the theme used for the save-the-world ending as well as for emotional moments throughout the game, plus a small amount of original material in the introduction and B section. The tempo and “feel” of the piece was based on that of the original, and based on the idea that this ending was a relatively comfortable continuation of the game world. The instrumentation is somewhat nonstandard and was created somewhat ad-hoc, but the use of Rhodes and cimbalom came from another (unreleased) arrangement I did a couple years ago.

In contrast, “Niko’s Lullaby” was an arrangement I envisioned almost as soon as I had solidified the album concept. It is based on a live improvisation: I sat down at my keyboard and just played a version of it, on the piano+synth pad sound which is heard in the final version. My piano performance skills are nowhere near professional, so this version contained a multitude of errors and awkward pauses; but I edited and re-recorded sections as necessary, and the version on the album has virtually the same structure as the original improvisation did.

In OneShot, not only does each sheep bleat at a different pitch, as is used in the song “Ram Victory”, but each sheep actually plays a unique sample, as Niko finds out as they walk around poking them. So I assigned the sheep to a keyboard, and created “Ramsong” as a joke which should be understandable by anyone who is a fan of emotional, fourth-wall-breaking indie RPGs that occasionally use animal sounds as pitched instruments. :)

Finally, “Happy Niko” was inspired by GIRakaCHEEZER’s remix of “Puzzle Solved” on the original OneShot OST album, but I wanted to create a more complex arrangement which could be enjoyed as a complete electronic track. My experience with producing EDM is limited, and so other influences snuck their way in--from marching band to carnival to whatever that piano solo was. The title was an easy choice, as I imagined Niko dancing to this song; and everyone knows that pancakes are what Niko loves the most, so they appeared in this song as well.

Special thanks to all the performers who helped bring this album to life; to Sebastian, for creating Materia Collective, without which the album would not be possible; and to Eliza and Casey, for creating such an inspiring game.